For those who have only a short time and want to discover the top highlights of Berlin on a 2 hour bike tour, this tour is just perfect. From our starting point in Prenzlauer Berg we go to Mitte towards Hackescher Markt and Museum Island and further Unter den Linden to the Brandenburg Gate. We discover the government district around the Reichstag and cycle along the former Berlin Wall towards Potsdamer Platz to the Holocaust Memorial. From here we past the former Führer Bunker and the Chancellor Super Markt to the Gendarmen Markt.

A special experience is this tour with our cool e-cruisers Uni Moke and Swing from Urbandrivestyle. Alternatively, you can also use our retro bikes from Excelsior or the compact e-bikes from Kalkhoff.

You can book this tour as a private bike tour at any time. With our cool e-cruisers from Urbandrivestyle this tour will be a special experience. Just send us a email.
Private Tour

From the Scheunen quarter to Friedrichstraße

Our tour takes us first to the neighborhood around Hackescher Markt through the Scheunenviertel. It was once the center of Jewish life in Berlin. Today, the highlights of the Scheunenviertel include many fashion stores, as well as small cafes and bars that invite you to spend time. Via the Museum Island past the Berlin Cathedral, our tour takes us to the Brandenburg Gate and to the Government Quarter, including the Reichstag, the House of Representatives and the Chancellery.

The next highlight is the Memorial to the Murdered Jews of Europe, the Holocaust Memorial. Here we take time to stop and then continue on quiet paths to the Gendarmenmarkt. The route also takes us along the former Reichsführer Bunker. The Gendarmenmarkt with the concert hall, as well as the German and French Cathedral is one of the most beautiful old squares in Berlin. Afterwards we reach the "Friedrichsforum", named after the Prussian King, Friedrich II, consisting of the main building of the Humboldt University, the Faculty of Law, St. Hedwig's Cathedral, the Berlin Opera House and the Bebelplatz, where the book burning took place in May 1933. Afterwards we will drive to the "origin" of Berlin, the Nikolaiviertel, where the first church of Berlin, the Nikolaikirche, was built.

In the center of former East Berlin: Alexanderplatz & TV Tower

Our bike tour will take us in the last part to Alexanderplatz, the center of the former East Berlin. Throughout the tour we have already spotted it, the tallest building in the city: the Berlin TV Tower. It has been used for broadcasting radio and television programs since GDR times and gained fame as a landmark of the GDR. The Bar 203 in the TV Tower is located - as the name suggests - at 203 meters of a total height of 368 meters. There you can enjoy the 360-degree view with cocktail creations and snacks. Translated with www.DeepL.com/Translator (free version) 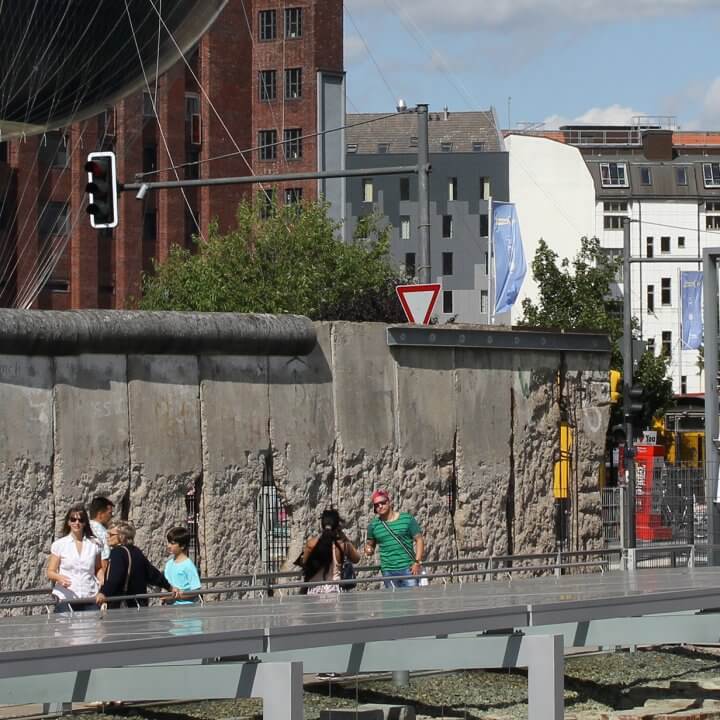 Discover the history of the formerly divided city at first hand 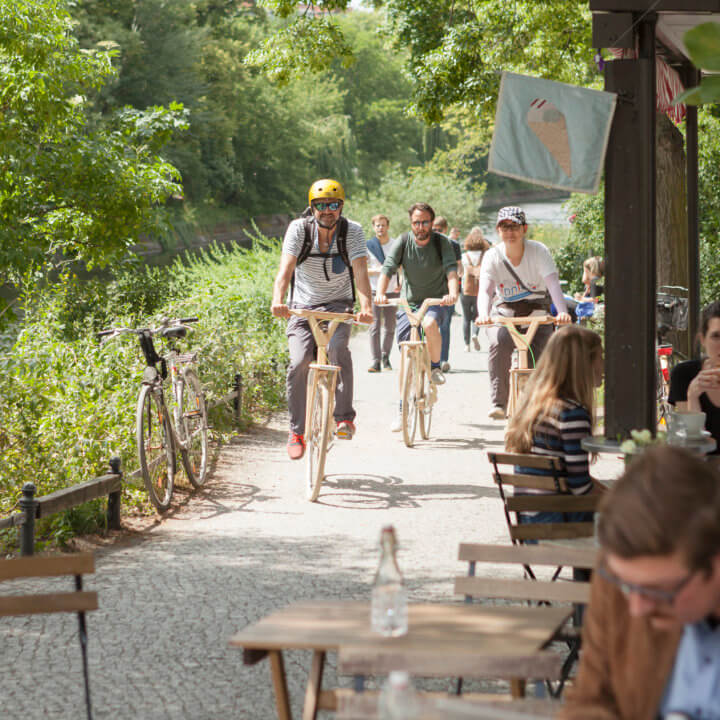 Discover Berlin with its many parks on relaxed paths. 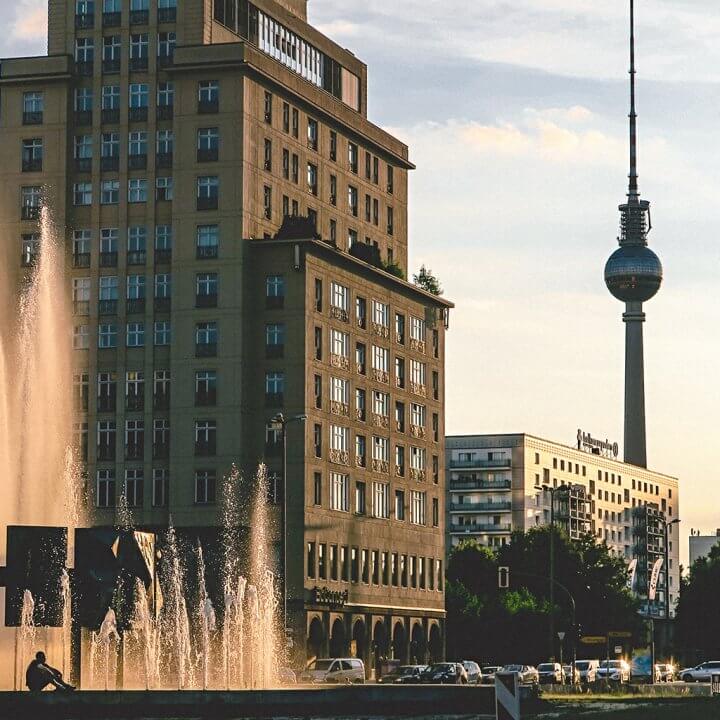 Former capital of the GDR - today pulsating life in the trendy east of the city.

East Berlin past and today 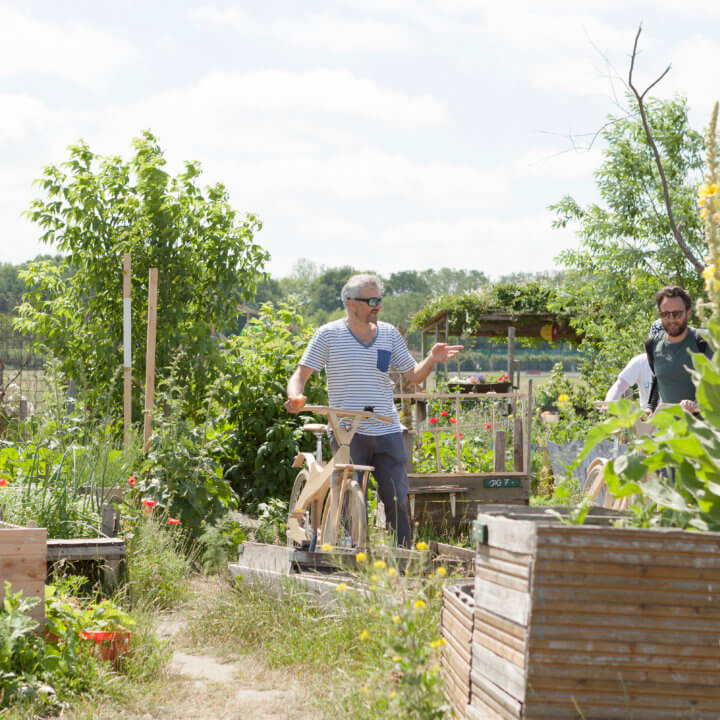 A tour of the city's most beautiful park, green spaces and community gardens.

Where do the tours start ?

Unless otherwise agreed, we start at our store, at Kastanienallee 55, 10119 Berlin.

Can we start the tour somewhere else?

Yes, we can start the tour from your preferred location by arrangement. Often your hotel has its own rental bikes: then we will pick you up directly there.

When will the tour start?

We have fixed starting times for our daily tours, depending on the tour. You can find these in the tour calendar, or on the specific tour page. We can also arrange an individual start time by appointment.

Do I need my own bike?

No, you can also rent a bike from us.

How many people are in the groups on the public tours?

On our daily tours in the tour calendar, a maximum of 10 people join us. On average, there are usually 4 - 8 people.

There is no participant limit for individually or privately booked tours.

How exhausting are the tours ?

We ride at a comfortable and relaxed pace. Our tours are 9 - 25 km long and last 2 - 5 hours. There is something for everyone. You should already be a little fit. But there are enough stops and enough time for breaks.

How can I pay?

You can pay with all common methods: Bank transfer, credit card, Paypal, EC card or cash before the tour starts.

You can book the tour on any tour page, or in the tour calendar.
Or contact us directly.

What is the difference between private, individual or booked with a tour calendar?

With the Tour Calendar you book a fixed, public tour with other people. All information about the tour can be found on the tour page.

At private tours you book a fixed tour just for you - simply private.

At Individual tours you give us details, such as time and interests, and we will put together a tailor-made tour for you. Or contact us directly.

Yes, we do some tours that are especially suitable for school classes, e.g.: East-West Berlin
bike tour, the Wall Tour or East Berlin - capital of the GDR. Select "school class" when booking to receive a school discount.

Or you can give us some information at Individual tours such as time, places, interests, and we will put together a tailor-made tour for you. You can also contact us directly.

What happens in bad weather conditions ?

We generally ride in all weathers. Each participant is responsible for providing suitable clothing. Should it not be possible during the tour, we will stop the tour. Safety first. If the weather does not permit a start before the tour begins, we will endeavour to arrange an alternative date. In principle apply here our Terms & Conditions.

Who are our guides ?

Our guides are as colourful as Berlin. They have lived in the city for years, know it and love it. They grew up in the east and west of the city, experienced the fall of the Wall and know the interesting stories and places. They are happy to share their knowledge and many tips about the city and its people with you. Also in several languages.

Do tours in the tour calendar always take place, or is there a minimum number of people?

Public tours take place with a minimum of 4 participants. If there are less, we will notify you and refund the price. You can also upgrade to a private tour, in which case the number of people is not limited.